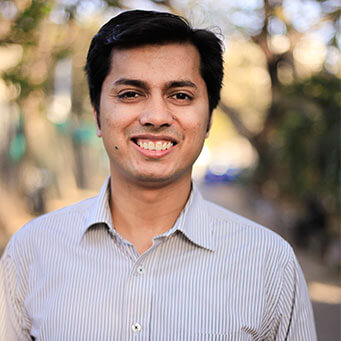 Arpit is a Director in Blume Ventures' investment team. Blume Ventures is one of India's leading early stage venture capital firms with investments in winners like Unacademy, Spinny, Slice, Turtlemint, Cashify and GreyOrange. Arpit has been covering a variety of sectors for Blume, currently focused deeply on Electric Vehicles, Logistics, Healthcare and DeepTech. Over the years, Arpit has led investments into Spinny, Cashify, Intrcity, Euler Motors, Battery Smart, BeatO and THB, each of them leaders in their industry segments.

He is amongst the most passionate people in India on enabling startups. He co-founded Headstart Network, India's largest startup community which touches more than 100,000 entrepreneurs annually. He also co-created India DeepTech, an industry alliance for promoting deeptech startups. He was named in the prestigious 40-under-40 lists by Equalifi (erstwhile AIWMI) in 2020.

Before joining Blume, Arpit started Acadmic Ventures, a consulting firm for commercializing technology, sold High-Performance Computing at Tata CRL in Pune and wrote video codecs at Ittiam Systems in Bengaluru. He is an alumnus of IIT Bombay and NIT Trichy.

Be a part of this unparalleled gathering of leaders.